Family Names and Video -“A Gathering”

Check the list to see if you are a part of our family!

In 2004 a plaque was unveiled on the Town of Markham Bicentennial Monument to commemorate the 200th Anniversary of the arrival of our pioneer families from Pennsylvania. The monument and associated landscape elements serves as a gateway for the Town of Markham. The monument is located on the Markham Civic Centre grounds. The elegant bell tower, with its authentic century bell is rung at civic ceremonies. The centre-piece of the monument is a mill stone unearthed from the banks of the German Mills Creek, and reflects early industrial activity. The upper steel structure is representative of Mennonite barn design from that same historical era. Attached to the tower is our bronze plaque recognizing the 69 families who came from Pennsylvania to settle in York County at the request of John Graves Simcoe, Upper Canada’s first Lieutenant Governor. 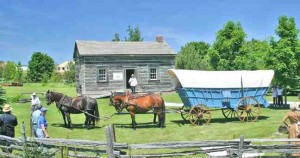 Video  –  “A Gathering” Remembering the history of the Pennsylvania German settlers to the Stouffville, ON area and their origin in Switzerland.

In 1852, the Altona Mennonite Meeting House (5475 Sideline 30, Pickering) was erected by area Mennonite settlers from Pennsylvania in the early 1800’s. Members of the congregation hauled the bricks from the Cherrywood brickyard. Heads of local families served through the years as trustees. These included Ressors, Widemans, Nighswanders, Hoovers and Stouffers. The first grave is dated 1835. The last regular service was held September 15, 1974. The church and cemetery are reminders of the work and influence of the Mennonites in the development of this community.   42 minutes.