The Mennonite community of South Cayuga Township, Haldimand County was an extension of the ‘Twenty’ settlement at Vineland and Jordan in Lincoln County. Disquieted by the future opportunity of land acquisition in Lincoln for their maturing families, Haldimand County, newly opened for settlement by 1830, was viewed with optimism.

South Cayuga lies on the north shore of Lake Erie, 10 km. east of Dunnville, a town near the outlet of the Grand River. Initially part of the Six Nations of the Grand River Indian Reserve, the heavy clay soil of South Cayuga Township was well suited to the cultivation of grain, hay, and livestock. In 1829 the Welland Canal opened a feeder canal with navigation from the Grand River at Dunnville. By the 1830’s, the first bridge over the Grand River, maintained by toll fees, was constructed at Dunnville. A thriving commercial centre, Dunnville boasted three store houses, three saw mills, and a grist, fulling and carding mill, fortunate factors for the Mennonite farmers from Lincoln County who were among the earliest land purchasers in nearby South Cayuga.

John Fry’s (Aug.7,1806 – Jan. 23,1884) Canadian roots stem from the 1800 emigration of his parents, Jacob Fry and Elizabeth Wismer, and his older siblings, Mary and Henry, from Bedminster Township, Bucks County, Pennsylvania. The Jacob Fry family first settled at the ‘Forty’ in Grimsby, Ontario. In 1816 Jacob Fry purchased land from Abraham and Margaret High on the escarpment at the corner of Victoria Avenue and Fly Road in Clinton Township. The restored Jacob Fry house now plays a vibrant role in Lincoln’s history situated on the grounds of the Jordan Historical Museum of the Twenty. 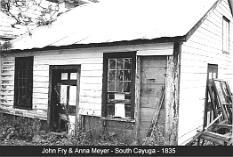 Jacob Culp (Oct. 14, 1797- Dec.18, 1875) was a leading figure in the establishment of South Cayuga as the first Mennonite minister from 1835 -1875. Jacob emigrated to Canada from Hilltown Township, Bucks County, Pennsylvania in 1803 with his parents, Isaac Kolb and Barbara Richards. In 1805 the Isaac Kolb family settled on land purchased from Amos Albright in Clinton Township, Lincoln County. Jacob Culp married Magdalena Kratz (Apr. 2, 1795 – Dec. 28, 1873) on May 18, 1819, the daughter of Rev. Valentine Kratz and Anna Lederach. Valentine Kratz was the ‘Twenty’ Mennonite congregation’s first minister elected in 1801. Jacob and Magdalena Culp lived on Concession 6, Lot #19 South Cayuga.

Religious services were an integral part of life from the earliest 1835 settlement in South Cayuga. ‘Fry’s Corners’ meetinghouse was built in 1839. Jacob Culp was ordained as the first Mennonite minister and John Fry became deacon in 1839. Joseph Grobb of Clinton Township, Lincoln County, received a Crown deed for Lot #14, Con. #6, South Cayuga Township, to which he deeded 2 acres of his property to John Fry. The congregation worshipped in a log building, erected for school and church purposes, on the Rainham Road, west of Fry’s Corners on the south edge of the road.

Joseph Nash (Apr.1,1810 – Mar. 9,1898) was ordained as minister in 1841. Joseph was the son of Abraham Nash and Mary Gross of Pennsylvania. Joseph emigrated to Canada about 1827. He first settled in the village of Campden in Lincoln County with his wife Mary Shelly. Joseph was a farmer and weaver, and the first Mennonite school teacher in South Cayuga.

In 1843 Enos Honsberger, who had also purchased Lot #13, Con. #6, South Cayuga Township, deeded another 2 acres to John Fry. On this lot in 1850, east of the cemetery, a frame church was built with Henry Honsberger as deacon. Successive ministers at South Cayuga Mennonite were Christian Gayman, Abraham High, and Isaac Rittenhouse. By the late1840’s a gradual loss of membership at South Cayuga Mennonite to the Evangelical Association occurred. The use of the English language in church services, Sunday School, extra prayer meetings and revival meetings, became increasingly popular drawing many of the younger people into other churches. The situation became critical when Joseph Nash, Abraham Nash, John Fry, and Dilman Fry withdrew from the Mennonite Church to attend Evangelical services. The first Evangelical Union congregation was organized under the leadership of Rev. E. Michael Eis from Pennsylvania who conducted services in settlers’ homes. The first Evangelical Church was a log building built about 1850 on land purchased from Abraham Nash. The church was located on Lot #16, Con. #7 west of South Cayuga village. The trustees were Abraham Nash, John Fry and Fred Beck Sr.

During the late 1880’s the Mennonite congregations in Haldimand and Lincoln counties suffered from the divisive conservative movement. A number of ministers and deacons withdrew to form the Wisler, or Old Order Mennonite congregation. Deacon Christopher Hoover remained with the old church as did Moses Hoover of Rainham. In 1931 A. Lewis Fretz, a young minister from Markham, Ontario, served both the Rainham and South Cayuga Mennonite churches until his death in 1963. S.F.Coffman of Vineland had bishop oversight in both churches for many years. On Sept. 6, 1965, the South Cayuga Mennonite congregation amalgamated with the Rainham Mennonite Church with services held at Rainham. The South Cayuga building was sold and moved from the property. The plot of land on which the church stood was also sold.

Today, much of the history and early settlement of ‘Fry’s Corners’ is reflected in its lingering vintage homesteads, churches and cemeteries dotting the landscape of yesteryear’s South Cayuga Township.