Schooners of the Twenty

RETRACING THE ROUTE OF THE SCHOONERS ON “THE TWENTY”

On a fine Sunday afternoon in June, Chapter members John Coffman and Les High joined a group of merry adventurers bent on retracing the route of the schooners plying the waters of the Twenty Mile Creek, in bygone years.   For lack of schooners, a small flotilla of canoes and row boats were pressed into service and assembled near the mouth of the Jordan Harbour.  Here, in 1813, the British Schooner Beresford once sailed in pursuit of American sailors fleeing in the aftermath of the Battle of Stoney Creek.  With their small bateaux forced ashore by cannon-fire, the Americans were said to have abandoned ship, fled up the bank, and surrendered themselves at Isaac Wismer’s cabin door. 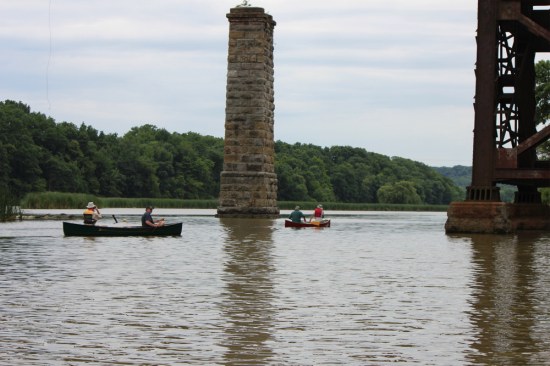 Paddling past the pillars of the old Great Western Railway

Although most of the assembled modern-day craft were in fine trim, the crew assigned to one rather geriatric row-boat voiced doubts about the sea-worthiness of their vessel. Had they known, they could perhaps have applied the remedy used in earlier days, when schooners were deliberately run up against the muddy banks of the Twenty and allowed to wallow for a time in the sticky clay which worked its way into seams and provided a natural and very effective caulking.

Following in the wake of their able navigator, Wilson Salter, (Friends of Lincoln’s History VP), the little fleet set off from Campbell’s marina on the west bank of the harbour, in an area once used as a turning basin by schooners visiting the docks of the Jordan Harbour Company on the east side of the harbour mouth.  (Owned by William Fretz and partners, the docks were in operation from 1897 until about 1912.)  Heading south, they passed beneath the railroad trestle and glided past the spot on the hogsback, near what was then Bridgeport, where Moses Overholt’s schooner The Flying Dutchman was built and launched in 1862.  Continuing  upstream, they pulled in to shore on the east bank of the Twenty, just a short distance beyond the old schooners’ wharf docking area north of Red Bridge.  The Louth Harbour Shipping Co. handled large quantities of grain and flour from the Ball Mills at Glen Elgin at the docks which were in operation from 1833 to 1855, and were run by John Wismer Sr.  Although water levels were too high to see the old mooring site that day, a prolonged period of drought later in the summer left the pine-pole pilings and stone-filled cribs of the old moorage wharf clearly exposed, and revealed them to be in a surprisingly good state of preservation despite the passage of time. 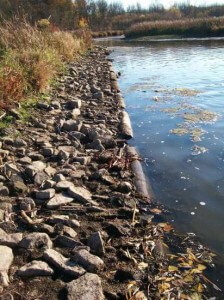 Even after the heyday of the docks,  sailors continued to frequent a public house operated by John Wismer Jr. along the main road in the valley near the wharf.  As sometimes happens, there were occasions when too much whiskey was consumed, and heated arguments would start.  John, a relatively small man, took it upon himself to expel a couple such rowdies, one Saturday night.   These men, being bigger and stronger  than  John,  turned on  him, and  in their drunken state, beat  him  so severely, that he died a few days later from his injuries.   During the brawl, it is said that John managed to bite off the tip of one man’s ear, – a mark of guilt the villain carried with him until the end of his days.

In the absence of the Wismer tavern,  our modern day, would-be sailors made their way up out of “the Deep Hollow” to the site of the old stagecoach stop on the “Queenston-to-Grimsby Stone Road.” (Better known in these  times as the Jordan House and Regional Road 81).  Here they enjoyed a bit of rest and refreshment before commencing the return voyage down-stream.  Their route carried them once again between the tall stone support pillars of the old Great Western Railroad.  The building of the permanent  rail trestle in 1855 cut off access to the upstream docks; brought about the demise of Glen Elgin; changed the bustling shipping centre of Jordan into a sleepy little back-water and effectively ended ship-building and schooner traffic on the Twenty Mile Creek.   –  Truly the end of an era.